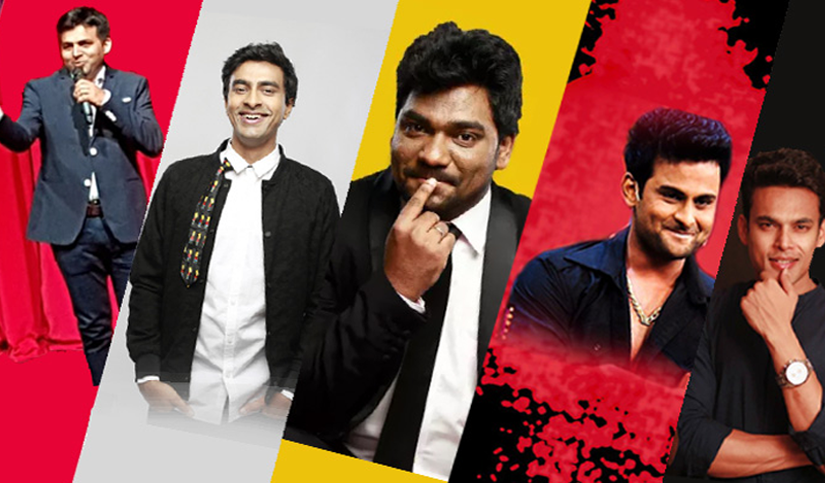 It is said that sense of humor is one of the most important human qualities.

Day to day people get stressed for various reasons, it could be because of peer pressure, college, work, wife, kids, there is no end to this sort of mental trauma one faces every day. But then, if life kicks you, you must get up and get on with it, whining doesn’t help. But laughter does. Thus, this is where stand-up comedians come in.

A Stand-up comedian (s) is a person who seeks to entertain an audience by making them laugh. This might be through jokes or amusing situations or acting foolish or employing prop comedy. Usually, Stand-up Comedian addresses an audience directly in front of him.

Stand-up comedy is a rising art in India and in the past decade there have been many important people who made this art look easy. Making a joke is easy, but working it out in front of hundreds and thousands of people on national television is not a matter of joke. They improvise; they create and thus create a new source of lovely entertainment for the entire family is really hard.

Here are 10 Stand-up Comedians who are trying to make You happy by their awesome sense of humor.

Amit Tondon was born on 14th December 1975 in Punjab. Amit Tandon is leading comedian is known as “The Married guy “. While running a successful and a leading recruitment consulting firm in Delhi – Empyrean Partners, he decided to explore his old interest- COMEDY. His stories on middle class, husband & wife, current affairs make his jokes more interesting and funny. Amit’s Humor is universal– Connecting with all segments of audience, be it middle aged, young-at- heart to young college going crowds. And now, he is a well known Humorist & Professional Standup Comedian. His videos are going viral over social media with over 50 million views. Amit has started TV journey with CEO’GOT TALENT telecasted on CNBC TV 18. He is the first comedian featured on NDTV, rising stars of Comedy. He hosted the New Year Show on Doordarshan in 2014. Amit Tandon has performed at Jaspal Bhatti Humor Festival with famous comedian Savita Bhatti and other celebrities- Wadali Brothers, Geeta& Babita Fogat.
Here is the link of his comedy video Indian Middle Class Symbols which make you laugh until u get stomach- ache.

Varun Thakur was born on 20th April 1987 in Mumbai. He is a stand-up comedian and co- founder of the comedy group, Schitzengiggles which specialize in stand-up, improve and sketch comedy, Varun Thakur is making the most of the fact that comedy has picked up big time in India. He is also an actor in Bollywood.

A true Mumbaikar, Varun’s father is Maharashtrian and mother is Sindhi. While it would have been logical for him to join his dad’s business, Varun realized that he was not cut out for a desk job. So he did BMM from Jai Hind college, majoring in advertising.

“rom 18 to 22, he worked with lot of TV channels and did a lot of script writing. His first movie, titled Question Mark was produced by Percept. His second movie was Jab Tak Hain Jaan in which he had a comic role.
Here is the link of his comedy video which get 5 millions views.

Zakir Khan is one of the leading stars of India’s new generation of stand-up comedians and Youtubers, who was born on 20th August 1987 in Indore. He comes from a humble background and credits his father with being supportive of his talent. In 2012, he rose to popularity by winning Comedy Central’s India’s Best Stand Up Comedian competition.
He is known for his punchline “Sakht launda”.

He recently gained more popularity on social media and completed his two million subscribers on YouTube due to his standup comic with Amazon Prime’s Haq Se Single.
Here is the link of his famous video “Haq se Single”.

Jayvijay Sachan is an Indian stand-up comedian. God has awarded a geat voice so that he do mimicry of any start very easily. He keep posting mimicry videos on YouTube.
His biggest achievement that brought him to limelight was in 2014 When he qualified as a semi-finalist in Colors TV’s “India’s GotTalent” being the only stand-up comedian to reach so far in all 7 seasons of the contest.

Shyam Rangeela often credited as Rangeela which literally means colorful, is one of the most popular stand-up comedians in India who was born on 25th August 1994 in Rajasthan. Shyam had a dream of becoming a comedian since childhood,Now he is one of rising popular comedian, and voice actor of India.

Rangeela came in to lime light when he performed in “The Great Indian Challenge” mimicking Prime Minister Narender Modi and Congress President Rahul Gandhi received standing ovation from judges Akshay Kumar, Zakhir Khan, Mallika Dua, Hussain Dalal although it was never aired on the Star Plus. Obviously, Rangeela was disappointed with the slamming of his act. But fortunately the video got leaked.

In an exclusive chat with Firstpost, Rangeela said, “I am glad that the video got leaked. Had this video not got leaked, and gone viral, people would have felt that I gave my auditions and got eliminated in the first episode itself which would have meant that I failed completely and was not even selected. This would have really harmed me, my career but it was good that the video got leaked. At least now people have come to know the truth and the reason behind my elimination and my ouster from the show.

Shaym had come to Mumbai with the hopes of getting a break in TV. With his video going viral and the ‘shocking’ mimicry of Modi, he has started getting calls for stand-up performances.

Here is the link of Rangeela’s video in which he mimics PM Modi and Rahul Gandhi.

Vipul Goyal is born in Rajasthan. He has been involved in theatre during college life. He is counted among the top comedy performers in India and also plays the main protagonist in one of India’s most successful web-series Humorously Yours. The show is produced by The Viral Fever India’s biggest web-series production house and depicts a hilarious semi-autobiographical account of his life interspersed with stand-up clips. Vipul is the only ace Indian stand-up comedian with a dedicated show of his own, with more than 50 million views on his online videos across various platforms (as of August 2017).

He is regularly invited to media forums for discussions on the Indian standup scene or his hilarious takes on current affairs.

He regularly performs at colleges and companies all over the country and went on his first official tour starting in late 2016 which continued into 2017. This is the link of his video on Kashmir Qtiyapa.

Rahul Subramanian has rapidly become one of the most recognizable faces in Indian stand-up comedy, and he’s very much aware of it. Rahul, like countless other young Indians, completed his engineering, secured an MBA, and made a living with a cushy corporate job before doing what he really wanted to do. For Rahul, stand-up comedy came to the rescue. Talking about his very first open mic experience, Rahul says he stammered while onstage, cracked some very bad jokes, and absolutely bombed.

A few years later, he has his own Amazon Prime Video India comedy special “Kal Main Udega” and he doesn’t hold back while talking about it. “I am the funniest,” says Rahul letting out a loud laughter. His comedy is firmly rooted in his belief that he genuinely is a funny guy, and many agree he is.

There’s a certain spark and excitement on Rahul’s face while discussing his style of comedy; a style he calls his own. Twenty-nine-year-old Rahul says that he doesn’t mind any criticism and that he respects freedom of expression but threatening someone is unacceptable.

His comic series called “Kal Main Udega” released on Amazon Prime and that’s when the problem started. As part of his act, he spoke about DJs and some couldn’t take the jokes and decided to troll and threaten him on social media. The comedian said that he’s cracked jokes on various other professions like engineers, air hostesses, bankers etc; but has never been subjected to such threats.

His delivery style of punches in a slow and morbid way, steals the shows. He is witty, understands that middle class comical journey to the rat race and often uses it to show the funny side of our life. This is the link of “Kal Main Udega” a stand up special, aimed at making no sense,by Rahul Subramanian.

Biswa Kalyan Rath is an Indian stand-up comedian, writer, and YouTuber who was born in 1990 in Odisha. After graduation, Biswa worked in graphic design, advertising, and software. It was during this time that he met Kenan Gill at an open mic event in Banglore in 2013.
He quit his job at Oracle in 2014 to become a full-time comedian. He started doing stand-up comedy in 2015 and went on his first solo national tour, Biswa In your face in September 2015, doing shows in Bangalore, Pune, Mumbai, Hyderabad, and Kolkata.
In 2015, he hosted the Comedy Hunt along AIB and other acclaimed comedians and also did a tour named Biswa Mast Adami. He has also created a popular web series called “Laakhon Mein Ek” which released on Amazon Prime Video in October 2017.
Here is the link of one of funniest video link “Laakhon Mein Ek”.

Sanket Bhosale is a Stand-up Comedian who was born on 9 th May 1988. He is known for his works predominantly in Hindi Television. He is able to mimic voices of many Bollywood and Hollywood actors. He is a mimicry artist, actor, comedian, show anchor and a doctor. He started doing Stand-up Comedy in 2012 by participating in Life OK’s show Laugh India India.

Bhosale was among of top 10 finalists in Laugh India Laugh. Here is the the link of his one of the best comedy video.

Abish Mathew is an Indian stand-up comedian and a Youtube performer. He was born on 28th Feb 1987 in Kerala and was brought up in Delhi. He is known for his work with All India Bakchod and as the host of Son of Abish. Son of Abish is a comedy talk show hosted by Mathew that debuted in 2015. He was an RJ in Red FM, Delhi before becoming a stand-up comedian. This is the link of exclusive video of Abish Mathew where he talks about Honey Singh.