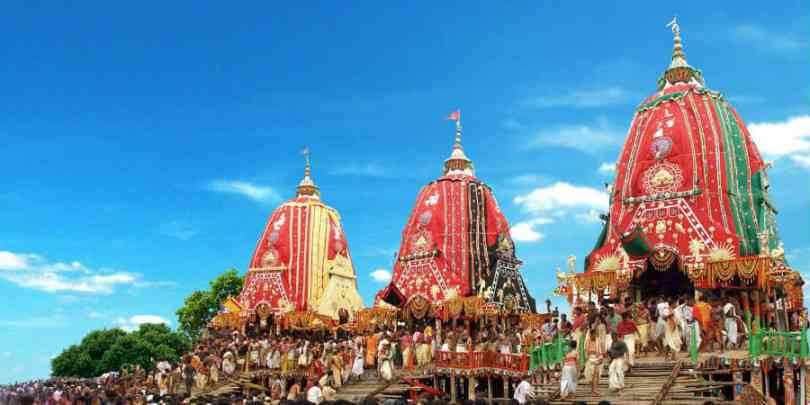 The puri jagannath temple was built during 1078 – 1148 CE by Jaga Mohan and vimana the Oriya ruler. The Temple itself carry many amazing facts. Here, Discover 10 most amazing and interesting facts about puri temple.

1. Every rath yatra get delayed at return, might lord wants all to darshan.

We all know about the rath yatra at ashadh sud bij. Every year near the Gundicha Temple where the entire procession comes to a halt on its own. This is a mystery despite the unwritten rule that the temple doors are closed to the public after 6 P.M. and great planning by the organizers the proceedings have delayed beyond fixed time in every Rath Yatra.

On another side, this also gives the opportunity to many of devotees to actually come and touch the idols which otherwise would not be possible in the precincts of the temple. Maybe it is the Lord’s way of saying that all are equal for him.

2. The lord idols are change every year

The old idols of the lord jagannath, sister subhadra and brother balbhadra are buried on one another. It is said that they disintegrate on their own. The new idols are making of tree wood and the old idols are to be kept at the tulsi garden near the jagannath temple at puri.

Might it is an architectural feat or what the Lord ordained, the shadow of the main dome is never seen at any time of the day. This is true for even sunny days and leaves many baffled. Science also put their hands down with this amazing face of jagannath temple.

4. The flag always flaps in opposite direction of air

It can be observed that the flag located at the top the jagannath temple dome always waves in the opposite direction of airflow. Also interesting thing about flag that priest climbs the dome of the temple which stands as tall as a 45 story building and changes the flag every day Since 1800 years as a part of a ritual. If it is not changed any day, the temple must be shut for the next 18 years.

5. Nothing fly over the jagannath temple. Even Flight!

Neither birds nor any aeroplane fly above the temple, maybe it is to for the respect and reverence for Lord Jagannath.

6. The Sudarshan Chakra at top the temple is visible from any part

The engineering techniques used at that time still remain as a mystery today about the Sudarshan Chakra standing is 20 feet in height and weighs a ton. It said to be visible from every corner of the city and it is installed in such a way that it makes you feel that it is facing toward you irrespective of the place you are in. Nobody knows the science of the chakra.

7. No ocean sound inside the jagannath temple

After entering the temple from Singha dwara’s entrance, the first step you cannot hear any sound produced by the ocean. But, when you exit it can be clearly heard. This can be noticed clearly during evening. There is no scientific explanation for this. Legend has it that Subhadra Mayi, the sister of the two Lords wished peace and serenity within the temple abode and hence it was made to come about that way.

8. The amazing face about Prasadam The Prasadam to the Lord is cooked on firewood in seven vessels kept one above the other. The miracle is that the food kept in the topmost vessel gets cooked first, followed by the second and so on till the seventh or lowest one above the fire gets cooked. This is amazing about the temple jagannath.

The Tulasi garden is the place where the old idols and newly constructed wooden idols are brought face to face, is where the Saligram is removed from the old idol and fitted in the new one for each of the three idols. The transfer of the stone is a physical act done by a sect, the special persons that have been doing this since a long. But the power that is transferred from the old to the stone in the new is a divine force that is actually felt by the very people.

I hope you enjoyed this article. Please share your thoughts in comment section. Also Please suggest some interesting topics so that we can serve you better.