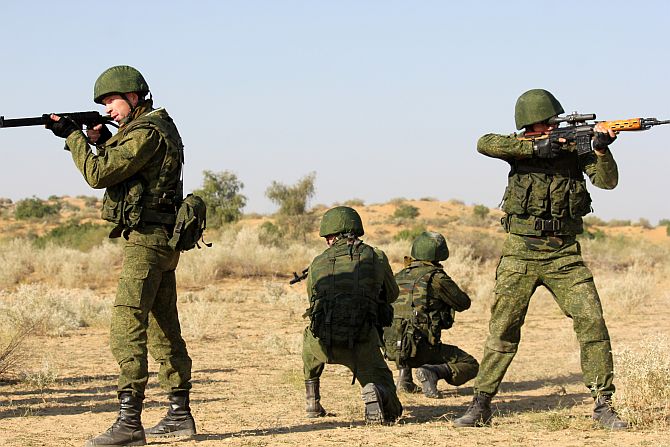 In this period of time, the world is increasingly becoming a more military place. The feeling is like we have entered a new modified cold war which is filled with groups who have no country and no flag. In the past few years, it has become clear that the strongest armies in the world are not the ones who have the largest number of guns.We are going to tell you about the Top 20 Powerful Armies Of The World. What according to you makes the best kind of army? Do you think it’s about advanced technologies, special training, powerful allies or there is something else?

Iran as an actual country has not been around for that long. Yet it is claimed by many that weapons of global firepower and mass destruction are hiding within its borders. Officially, they do not have any. Iran as a country as often been feared as an unknown entity, just like other neighboring countries which have some of the strongest armies in the world.

Australia is a very large country. It is geographically separated from the rest of the world in a rather significant way. The main part of being separated means that they aren’t prone to attacks from any other nation. This also means that Australia’s army is not as strong as the other nations around the world. It is indeed the reality for Australia and the people within the large nation.

Many Asian countries are wary of the influences of the West. They try to make sure that their children and the next generation do not take too much notice. Indonesia is the country that is all about the West. One’s cooperation with some of the strongest armies in the world sounds like a good idea. But Indonesia is not looking for powerful friends for the reason that they are weak. Indonesia could easily be a major player in the world. They have more than one hundred million pairs of feet on the ground. Instead, they have chosen to use the most powerful army in the world. This is done to ensure that terrorists are brought to justice.

They don’t have any nuclear warheads or aircraft carriers. But they do contribute troops to UN peacekeeping missions. Poland in the complete sense has had a rough history when we talk about the war. World War II nearly decimated the country. It affected a large portion of its population. Poland has since been able to bounce back pretty nicely. But their military stance is very weak in comparison to other European countries.

Canada has a huge army, a Navy to die for and an Air Force out of this world. They have about two hundred tanks. Canada has been almost neutral during the historical battles of the world. It is a place where people go to get some peace. Canada is as boring militarily just as vanilla ice cream.

Brazil has the second largest army in Latin America. They use the most powerful army in the world in order to keep the countries around them happy.

For example, ever since 2004, Brazilian armed forces have been stationed in Haiti. This is done in an attempt by the United Nations to bring a ‘Stabilization Mission’. The country is now able to follow any deforestation that occurs. They are ready to prevent illegal poachers from taking anything precious and natural away from the land.

Egypt has kind of fallen in the eyes of many in the West, in the last few years. Despite all of the changes in government and administration, the strongest military in the world is going quite smoothly. It is because of Egypt’s geographical location, that it is able to take part in both Arabic and African affairs. For Egypt, the cost of being one of the strongest armies in the world is a huge amount of responsibility.

From the time the country of Israel was created in 1948, it was formed on a totally equal basis. This meant that women had the same rights and responsibilities as any other male citizen. This meant that just as every man and woman would have to take part in military service once they reached a certain age. Only three countries in the entire world have this compulsory policy. The other two are Norway and Eritrea.

When Japan surrendered at the end of World War II, it signed a peace treaty. The treaty stated that Japan would limit itself by never creating an offensive army. This was to make sure that a world war including Japan could never happen again. However, according to many people, it was just the United States’ way of making sure that they didn’t compete with them. This simply means that Japan is not permitted to own any nuclear warheads.

South Korea gets a pretty raw deal. This is simply like many other countries that have been split into two or more pieces just because of internal strife and conflict. Yet there are many foundational problems. They haven’t gone away. South Korea only shares a border with one other country, and that is North Korea. North Korea is the most powerful army in the world at their disposal. This means that South Korea has to take their military extremely seriously.

We have all seen the headlines of advancement of ISIS and the war on terrorism. ISIS has been using violence to terrify those around them. This means that countries that border other countries where ISIS has a strong presence are in greater danger. Turkey has decided to meet the problem head-on.

Compared to its economic prowess in the world, Germany is slightly falling behind in the ‘strongest military in the world’ stakes. Germany’s military strength has actually got weaker in the last few years. This is making it an unlikely candidate for the most powerful army in the world award. Mandatory military service was removed. There is still fewer than two hundred thousand active personnel. What does Germany have? Advanced tanks, fighter jets and a whole lot of German efficiency.

Pakistan army is one of the two countries in the world that are desperate to modernize their military. Pakistan Army came into the existence of the British Indian Army. It ceased to exist following the partition of India. This resulted in the independence of Pakistan on 14 August 1947.

As per, the International Institute for Strategic Studies (IISS), it had approximately 620,000 active personnel as of 2015. There is 16–23 years of age for voluntary military service. The soldiers cannot be deployed for combat until age 18 according to its nation’s constitution.

4. India : one of the most Powerful Armies

India is the second most populous country in the world. It contains a huge number of businesses that are committed to technology and research. India could very easily become a world player because of their global firepower. The army of the country is too much into taking care of the people and keep their lives at stake for country’s safety.

We have all seen the video footage of the lines and lines of soldiers parading. This is the proof of what is the key to China’s army power. Some even called the Chinese army the strongest military in the world. Why is so? The answer is that it is a numbers game. The main thing to remember here is that China is the most populous country on the entire planet. This directly means that they have far more people at their end to join the army.

Russia was once considered the most powerful army in the world. The military power of Russia is still making huge changes. The changes are in the way that politics happens around it. It is quite hard to argue with a country that has over eight thousand nuclear warheads. It has been difficult to ignore the radical time that Ukraine has been having for the last few months.

Russia has never officially got involved in the military rebellious conflict. But every single person in the world is pretty convinced that they have been supplying global firepower to Ukrainian rebels.

1. The United States Of America

Talking about the most powerful american army in the world, it’s is completely about technology, experience, and money. The USA is considered to be one of the wealthiest countries in the world. There is a huge amount of investment going into their Air Force, Navy, Army and Special Units. The United States has the strongest army in the world as per many reports.

If you like this article and wanted to sat something then ping me on facebook.com/comedymood