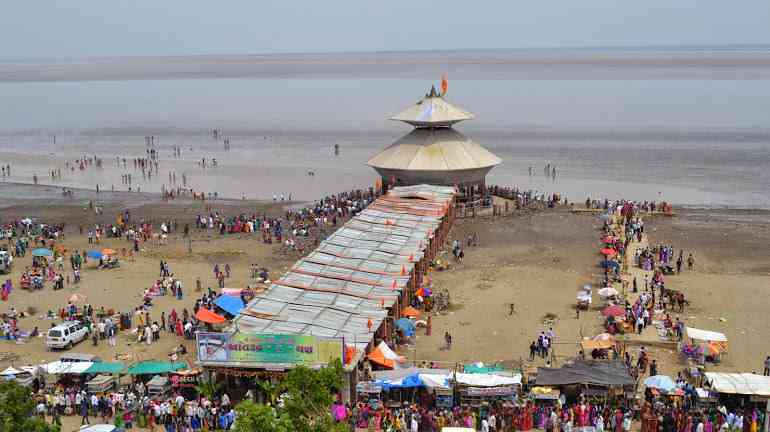 shree Stambheshwar Mahadev – A mysterious temple of lord shiva is located 85 kilometers away from Baroda in Bharuch district’s Jambusar border remote village named ‘Kavi’. You might find strange to know that, this temple disappears twice in a single day!!
yeah.. you heard right. it’s disappeared.. but after some time, again it comes at the same place as before.

This is happening because of water level increase in the ocean. When the water level is down in the ocean, you can visit the temple. This processor has been reoccurring since very long. At the time of tide, shivling completely disappears into the water and no one able to reach the temple. You can take a beautiful view of Arabian Sea just behind this temple. This temple had come to know about 150 years back. Temple’s shivling is around 4 ft in height and 2 ft in radius.

As per local devotees, Lord of Ocean itself came to offer Abhishek to God. This temple is also mentioned in rudra sanhita’s eleventh chapter of ‘shivapuran’. Many devotees have come to see this miracle. During every Mahashivratri and Amavasya big fair arranged at this place. At the time of Pradosh, Purnamasi and Ekadashi priest do four times Pooja in the temple.

As per Old Legendary story, Tadasur has done very hard prayer and impressed lord Shiva and asked for a blessing that, no one can kill him. Lord Shiva said, “This is not possible.” Then that Evil asked for another blessing that, “No one can kill him except the son of Lord Shiva and that also in six days.” After getting this blessing Tadasur has started showing his worst side in all three piles of earth. All Gods had come together and reached to Lord Shiva and tell them about their problem. Shiv-Shakti’s son Kartikeya was having six Head, four eyes and 12 hands which were born in White Mountain. Kartikeya killed Tadasur within Six days only. When Kartikeya came to know that tadasur was the follower of lord shiva, and then he became hesitate. Lord Vishnu has told him that, “Build one Shiva temple at the place of killing Tadasur so that you can get peace in your mind. They have built Vishwa nandak Stambh at Mahisagar Sangam Tirth. All Gods became present there. Lord Shiva itself takes their place in the west side of Stambh. That is why this place is called Stambheshwar Mahadev.